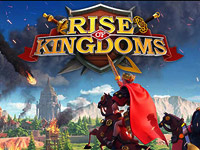 Rise of Kingdoms: Lost Crusade is an online multiplayer strategy game. It is developed by Lilith Games and released for Android and iOS devices in September 2018.

In a large kingdom, you play as the governor of a small city. Your task is grow your small city into a great power and become the strongest governor the kingdom has ever seen.

Your city becomes stronger with every upgrade you make on its buildings, technologies and troops. Use the cavalry, ranged, siege and melee armies to attack and conquer other lands. As you progress in the game, you can acquire new characters as commanders. You can use them to lead your armies.

In the beginning of the game you will be mostly battling the barbarians and collecting basic items to build and expand your small city. Then you can slowly start to upgrade you city and unlock new features by fighting with other cities and collecting gems and other rewards.

Participate in daily quests to win new commanders and the chance to upgrade their abilities. You can also use the gems you have collected to upgrades and make new purchases for your city. With each battle, your commanders can unlock new skills and become even stronger.

Rise of Kingdoms: Lost Crusade is a free game. Like many games in this genre, the game will slow down as you progress to later levels. You either need to wait or spend real money to upgrade and increase the abilities of your armies to speed up your progress. This might put some players off.

Can I play Rise of Kingdoms offline?


An uninterrupted internet connection is required to play Rise of Kingdoms.


What is the age rating for Rise of Kingdoms?


Rise of Kingdoms is rated PEGI 12. Video games that show violence of a slightly more graphic nature towards fantasy characters or non-realistic violence towards human-like characters would fall in this age category. Sexual innuendo or sexual posturing can be present, while any bad language in this category must be mild. Gambling as it is normally carried out in real life in casinos or gambling halls can also be present.


What devices is Rise of Kingdoms compatible with?


Rise of Kingdoms can be played on devices with Android 4.1 and up and iOS 8.0 and up.


Does Rise of Kingdoms contain ads?


No, Rise of Kingdoms doesn't show any ads?


Yes, you purchase in-game items in Rise of Kingdoms.

Rise of Kingdoms Is available on multiple platforms. Click on the buttons below to download the game from the official websites of your chosen platform.

Welcome To FreeGamesBay! Here you can find a curated collection of free web games that you can play in your browser and free mobile games for your phone. You can find action games, adventure games, arcade games, puzzle games & many more fun games. Stop wasting time with bad games. Find good games to play here at FreeGamesBay.
© 2021 FreeGamesBay. All rights reserved